Stock prices have been trading on the defensive as traders are focusing on interest rates, which are on the move higher. Rates are on the move because of commodity price pressures, and the Fed will not be slowing their normalization of interest rates. Record earnings have had little effect on stock prices, as major technology shares like Google have been hammered despite record financial results.

The 10-year Treasury-note yield is still holding on to its perch over 3.0%, helping the dollar index rally another 0.5% and putting downward pressure on share prices. Volatility is on the rise as the VIX equity volatility index is up another 10% to the 20.0 area. Despite record earnings from technology giants such as Google, the share price of several major tech companies has been hammered.

Google earnings and revenues were better than expected, but when you are trading in a bad tape trading tends to focus on the negatives. Despite record results, traders focused on the increase in spending, which surged as Google bulked up investments. This was an attempt to stave off Amazon which is impeding on every one’s territory.

Google reported that first quarter earnings per share was $13.33, which was up 72% year over year. The company reported revenue of $31.15 billion which was an increase of 26%. The issue at heart was the increase in traffic costs of 36% to $6.288 billion dollar compared to expectations that costs would rise to $6.03 billion. Initially the stock price surged following the financial results, moving up to $1,100 per share, but when the market opened the day following the earing results price tumbled, dropping more than 5%.

The story was that although Google topped earnings and revenues and their guidance was higher, there attempts to keep up with Amazon had impacted their financials. The company reported that operating margins were 40.6% which was below analyst’s projections of 41.9%. So while the company was spending more money to generate results, by capturing market share, the rate of return declined. Google reported that capital expenditures jumped to $7.3 billion from $2.5 billion which included a $2.4 billion hit for a real estate purchase in Manhattan. 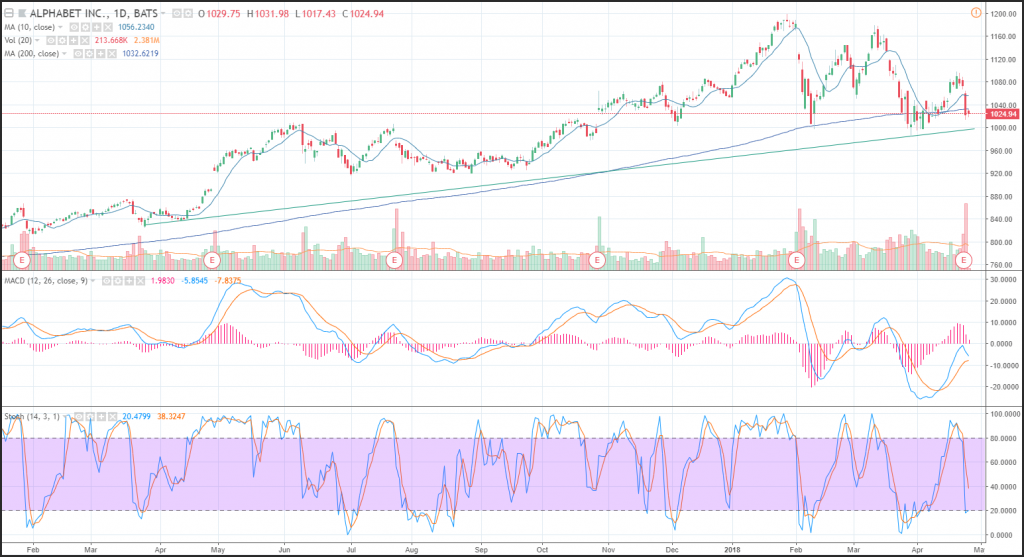 Prices are oversold as the fast stochastic tumbled to the 20-oversold trigger level which could foreshadow a correction. Momentum is decelerating as the MACD (moving average convergence divergence) histogram prints in the black with a declining trajectory which points to consolidation.