Riise is the UKs first Vegan breakfast brand and I recently spoke with its founder and CEO, Amrit Hathiramani on his journey so far. This is his story. 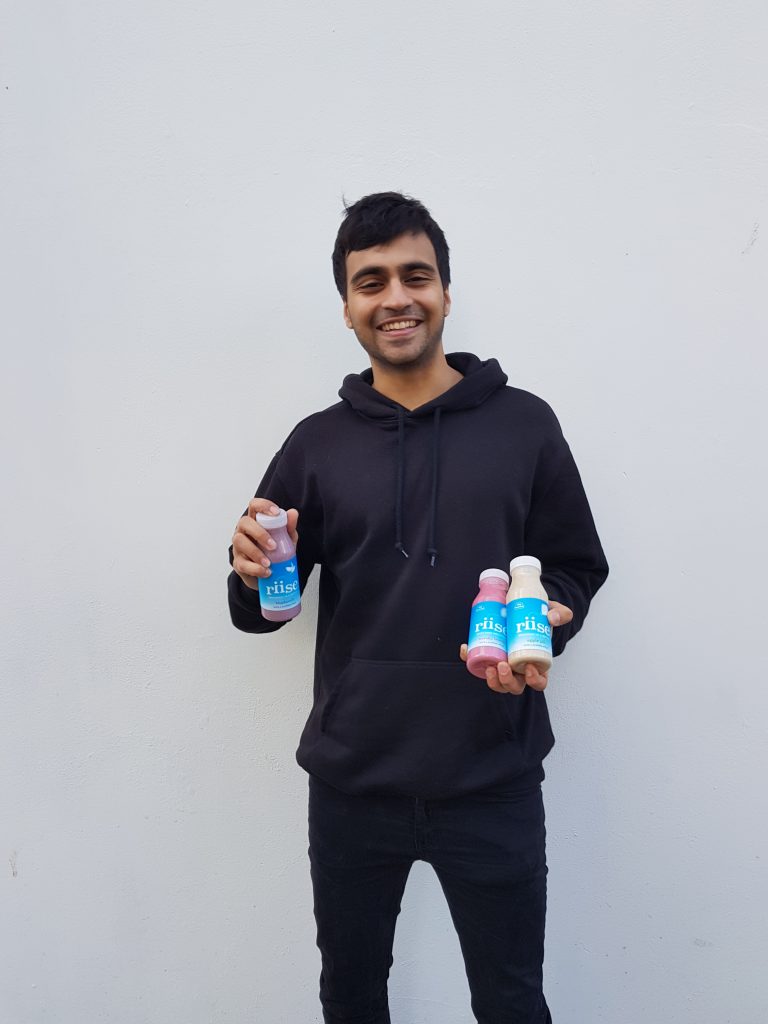 Hi Amrit, thanks for agreeing to share your story on YHP. Can you give us some background information about yourself?

My name is Amrit and I am a 25-year-old from London - but with an international background. I grew up in Africa until the age of 13, before moving to the UK and I attended the University of Bristol studying Finance where I graduated in 2015.

How did the idea for Riise come about?

I have always found waking up in the morning very difficult. Often this meant being late, for school and university, and then after that, being late for work. Embarrassingly I held the record at my old job for the most late days in a month.

More often than not this morning rush would result in either not eating breakfast, or compromising on something easy but unhealthy. One day, whilst getting frustrated over how something as simple as porridge could still take so long to make I decided to throw my oats into a blender. The result was a convenient and healthy breakfast I could eat on the go!

At the same time, I was becoming acutely aware of how our food choices were impacting the environment. Having grown up in Africa I had always had a strong affinity with the natural world. The environmental cost of dairy was particularly scary. As something consumed mostly with breakfast, I saw this as an opportunity to tackle both health and sustainability. By creating a range of tasty and accessible plant-based breakfast options, our mission at Riise is to make breakfast the vegan meal of choice.

Unlike a lot of entrepreneurs, I think I quit my job quite pre-emptively. I was 23 and didn’t really have anything but a product and a brand idea. As I’m sure you can imagine this lead to a considerable number of mistakes. The first challenge I had to manoeuvre was a shelf life of just 5 days. Although I had a reasonable amount of sales I quickly realised that the business wouldn’t be scalable. I therefore had to redevelop products, which was extremely difficult because I was adamant on having a clean labelled product.

The other major challenge for me was finding a manufacturing partner. Unlike some business such as canned beverages, or crisps, the shelf life of my product is only 35 days. Finding a manufacturing willing to accommodate relatively small runs to start with to help me get traction was very difficult and took me almost 6 months to find.

What is Riise? And what are you trying to solve with it? 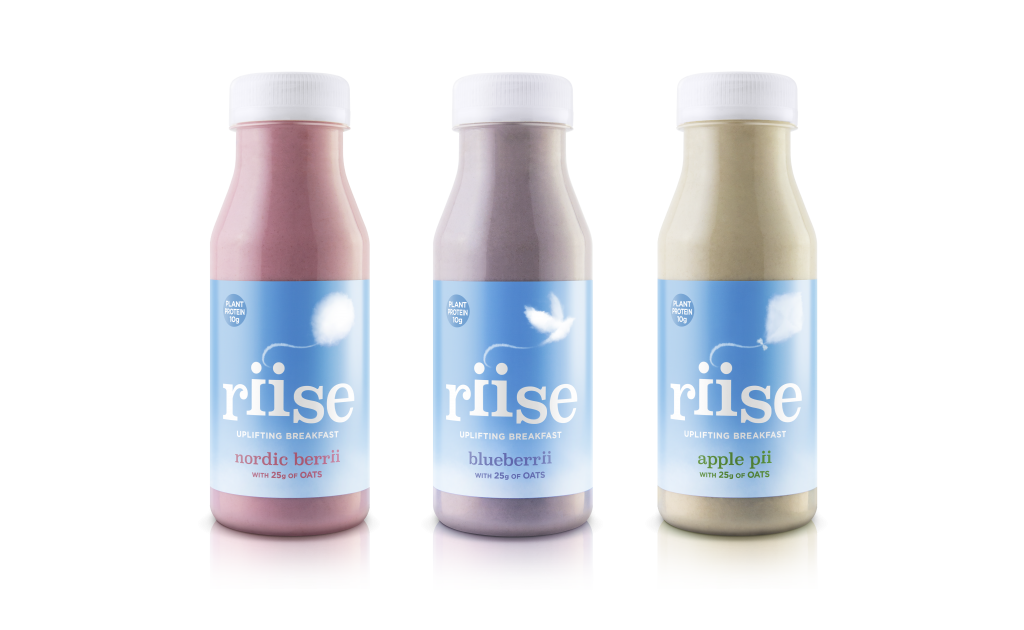 Riise is the UKs first Vegan breakfast brand and our focus is convenient or on the go breakfast formats. It’s no secret that the society we live in today is very time pressured, all the data shows that more and more people are eating breakfast on the go, so there is a real need for good innovation in this space. Although ours isn’t the first breakfast drink, I definitely believe it is the best.

In addition, there is a whole demographic of people that don’t have time for breakfast, and by focusing on a currently untapped market I believe we are able to offer these people a frictionless solution. This is why we also offer direct ordering through our website. For as little as £2.70 a meal, you can stock your fridge with a month’s worth of breakfast. It might not be something you have every day, but it’s always great to have an emergency back-up for the mornings that are especially rushed. Its quick, easy and nutritious. No preparation, no clean up, no hassle.

It’s been a combination of self-funded and a loan from the start-up loans company which was facilitated by virgin start-up. Now that we have a decent amount of traction, we are currently in the middle of our first raise! This has been a really educational experience and has got us thinking about the business through a lot of different lenses we previously hadn’t considered.

It actually took us a bit of time to get traction. Some companies have amazing launch plans that involves a build-up and secured retailers. We didn’t. As soon as the product was ready we figured lets just get it out there. My view was always that we needed to start collecting feedback and the only way to do that productively was to try and sell. As it turned out there were a number of things we got wrong, so we tested, adjusted and improved. Selling online really helped as well, as we were able to communicate with customers much more directly.

Once we made a few changes to our packaging and product we were pretty much set and sales both in store and online started to pick up really well.

By the time I launched my business I had been working on Riise for about 14 months. The first production run we did was exciting but also pretty nerve racking. I will admit we didn’t get everything right from the start, but my mentality was always that as a consumer facing business the customers opinions were the only thing that mattered. So, I was very prepared to make adjustments where I had to. Fortunately, as we made improvements so too did the overall sales and feedback on the product which is an ecstatic feeling!

The decision to outsource both our production and distribution meant as a company we could focus on the brand. It was a strategic decision we had made from the beginning as that’s what played into our skill sets best. Even as we grow, it’s important for us to keep the company as lean as possible. We mostly hire freelancers to do little bits of work here and there, and tools such as upwork have really enabled us to make the most of the gig economy.

Additionally, the decision to sell online was an important one. It allowed us to not have to rely on a single buyer at a retailer to like our product, but appeal more broadly to anyone in the UK whose need we are addressing.

There are 2 special highlights so far. The first was a few days after we first started selling, I happened to be in a store with our product and witnessed a customer pick and buy a bottle.

The second was more recently after the launch of our online store, when someone who signed up months ago during one of our market stalls, purchased £35 worth of product in one go. There is no better feeling than someone actually getting out their wallet as a stamp of approval for your product.

What should we be expecting from yourself and the Riise team for 2018?

For us, it’s just the start of the journey and we know we have a long road ahead. We’re hoping by the end of the year to: have our first listing with a major retailer, to have launched our first breakfast product outside of the breakfast drink range, and to have a launched the subscription side of the business (our online business at the moment is just one-off orders).

The first thing I would say is you need to be persistent. Persistence in the sense that you just keep going, no matter how difficult or impossible the task at hand may seem. Whether it be trying to find the right supply chain partner or trying to catch a break with your first retailer. Until you’re established you will hear more no’s than yes’s.

Which is why the second piece of advice is that: you really need to believe in what you’re doing. For me, it was both seeing the opportunity and knowing that I was doing something with a bit of substance and meaning.

And the final piece of advice is to ask for help. I’m probably guilty of not having done it enough, but reach out to anyone and everyone in your network. A lot of people will ignore you, but a few who recall what it’s like will respond. Be honest with them about what you do and don’t know, and it will help you progress faster.