Today we talk with Kirsty Ranger who had an idea and made it happen. She's now helping others with the same.

We all have business ideas. Lots of people even give their business ideas a go. However many don't often get critical neutral feedback, the most helpful kind of feedback. So what if you could get your ideas out in front of the world? Share what help you need, put yourself in front of potential investors or new hires. Well now you can do that thanks to Kirsty Ranger and her business IdeaSquares. Here's her story: 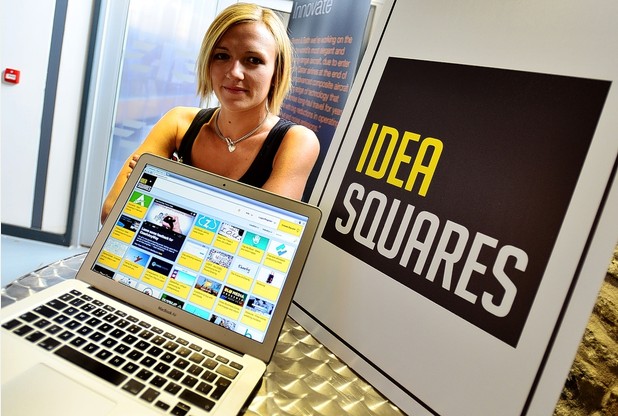 Originally from the North West of England, I travelled (did 2 ski seasons, one in NZ one in Switzerland), spent 10 months working in Australia before coming home to study Psychology at UWE in Bristol. I had a brief career in psychological therapies and research before deciding to do something more exciting!

IdeaSquares is a virtual space for business ideas. Whether a business idea is at the very beginning, or is ready for investment, ideas on IdeaSquares are instantly open to votes, support and feedback from the crowd. Often the first step to perusing an idea means to network. Build a network of supporters and receive feedback from as many sources as possible. We’re sourcing the support of major funding partners, incubators, accelerators and startup supporters. We’re now working with ideas to help them to become ‘investment ready’ and are referring businesses to funding partners.

How did the idea for IdeaSquares come about?

Shows like Dragons Den, where people pitch ideas for funding on TV have encouraged entrepreneurs to broadcast/share their ideas. By doing that, even if they get a ‘no’ from the dragons, it’s usually a useful experience. I thought it was interesting that people are less reluctant to share their business ideas these days. I think the internet especially, has encouraged more openness and collaboration between entrepreneurs. I thought, what if there was somewhere online that the journey of perusing a business idea could begin. We live in a hyper-connected world and the path to entrepreneurship has never been more accessible so it made sense to me to allow people to submit their ideas online. We’ve now had over 1200 ideas submitted to the site.

We offer additional promotion for ideas, by featuring you in our newsletter, on our home page and shouting about you via social media. This does well (roughly 10% of businesses choose to pay for the additional promotion). We also receive referral fees from funding partners If they invest in an IdeaSquare.

How did you initially fund the idea?

With my own money and a small non-equity crowd fund I built an MVP. I then took this to Webstart Bristol and was accepted onto their first incubator program along with 9 other Bristol based startups. I received a small investment, 10 weeks of support and housing and excellent mentorship. I turned 20 or so ideas into 350 ideas in this time. I then raised a small Seedrs round in May. Since then, we’ve reached over 1200 ideas, have secured major funding partners for the ideas on the site to be referred to, both in the UK and internationally, and have prepared to scale internationally. We very recently raised a further round on Seedrs to aid scaling our model, reaching 100% of our funding target in just 7 days, we are now overfunding for last minute investments! So don’t miss out.

What is that funding for?

This funding is simply to scale. We’ve made new hires, identified key partners, engaged in cross marketing efforts with international partners and are ready to begin referring internationally. 80% of ideas to the site come from outside of the UK, so it only makes sense to do this. We aim to have at least 5000 ideas submitted to the site within a further 6 months, from all over the world.

What do you think was key to you successfully raising on Seedrs?

The key to the success of a successful raise on Seedrs is in the planning. You could have the best idea in the world, but if it is poorly executed on Seedrs, it will likely fail on Seedrs. You need to make sure your video tells a clear story in a short space of time whilst giving a good, general overview. You need a good marketing strategy. You need to have a network of supporters to seed the first 30% of your round before you can rely on the Seedrs community to invest. To ‘crowdfund’ you need to be able to bring in the crowd!

Where do you see the future of IdeaSquares?

I would love for IdeaSquares to continue to become strong brand that is well known for supporting and providing opportunities for entrepreneurs and their ideas, all over the world. I think we’re working really hard to try and make a difference to entrepreneurs and open up opportunities in the early stages of an ideas’ journey. This is often the hardest time to be heard! We’re working with key partners and seem to be so well supported in what we’re trying to achieve. If we can even support 1 company from Idea to grown up, funded business that is creating new jobs and opportunities, I’ll be happy! Although the vision is obviously to do this for far more than 1!

What has been your biggest challenge so far?

The biggest challenge was right at the beginning. Getting people to listen to my crazy idea about a website with squares full of ideas! Luckily Webstart Bristol loved it. As I said, this early stage is the most challenging time. Overcoming this challenge only re-enforces that what we’re doing with IdeaSquares Is useful!

How did you overcome it?

Talking to as many people as possible. Networking, sharing the idea, asking for help, asking for money, just putting everything into this. If anyone thinks being an entrepreneur and having your ideas heard is easy, it isn’t!  You have to work so hard, be persistent, confident, consistent and lose a lot of sleep. But it’s so much fun. When it’s yours, something you’ve done and worked really hard for, when someone says ‘hey this is awesome’ it feels so rewarding.

What has put the biggest smile on your face since starting?

Two occasions come to mind. Once when the first square was submitted and once when someone first asked if they could pay to be in our newsletter. In the grand scheme of things those were small milestones, but they were the most significant to me.