Peter Thiel took part in a Reddit AMA (Ask Me Anything) this past Thursday. Redditors took to the site to ask him about everything from startup advice & Bitcoin to NSA, Edward Snowden and he also gave some insight into life in Silicon Valley.

There were some great questions and even better answers. I have picked a selection so you don't have to sift through the whole lot.

To begin, he gave this short bio:

Hi, I'm Peter Thiel, co-founder of PayPal and Palantir, first investor in Facebook, venture capitalist at Founders Fund, and author of Zero to One.

And proof it was actually him answering the questions... 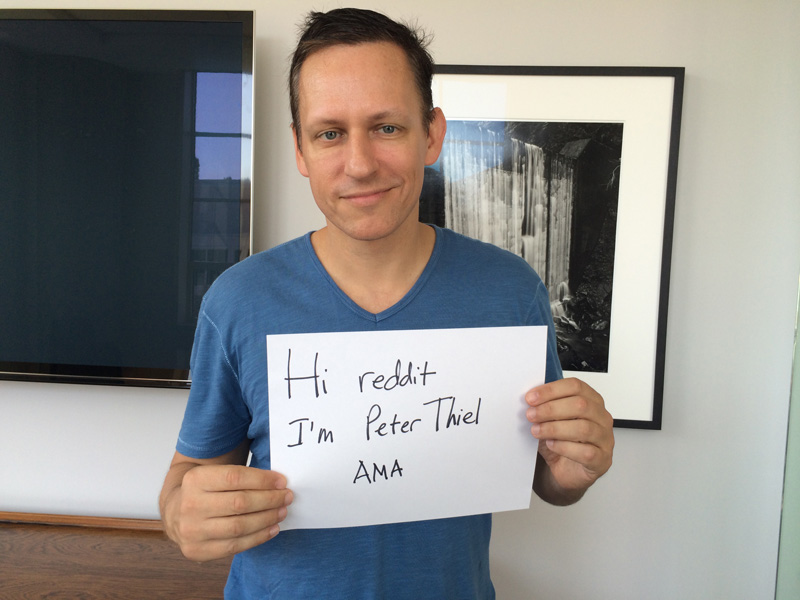 Then the questions came in...

What did you think when you first met Elon Musk?

Very smart, very charismatic, and incredibly driven -- a very rare combination, since most people who have one of these traits learn to coast on the other two.

It was kind of scary to be competition against his startup in Palo Alto in Dec 1999-Mar 2000.

What do you think is the most exciting example of a company showing "determinate optimism" today?

The dual Elon Musk empire of Tesla and SpaceX.

What do you think about NSA/Snowden and the impact on cloud, security, and general startups in the USA?

It is a much-needed debate. BTW, I don't agree with the libertarian description of the NSA as "big brother." I think Snowden revealed something that looks more like the Keystone Kops and very little like James Bond.

The first thing an intelligence agency should do is counter-intelligence, and the NSA could not even figure out that there was something suspicious about an IT person downloading all those files. And once they knew Snowden had done this, they apparently still couldn't figure out what all he had taken...

It was inappropriate that the US was tapping Angela Merkel's cell phone. But I suspect that this was news to Obama as well. And more generally: the NSA has been hovering up all the data in the world, because it has no clue what it is doing. "Big data" really means "dumb data."

What was your reaction to THE SOCIAL NETWORK movie?

The zero-sum world it portrayed has nothing in common with the Silicon Valley I know, but I suspect it's a pretty accurate portrayal of the dysfunctional relationships that dominate Hollywood.

What's the worst investment you've ever made? What lessons did you learn from it?

Biggest mistake ever was not to do the Series B round at Facebook.

General lesson: Whenever a tech startup has a strong up round led by a top tier investor (Accel counts), it is generally still undervalued. The steeper the up round, the greater the undervaluation.

I like your initiative for change (i.e. challenging higher education). Any plans to challenge the patent system?

Bonus tip for philanthropists: Find a way to sue Intellectual Ventures. If we could get rid of these parasites, we'd all be better off.

What is one piece of advice you have for entrepreneurs today?

Start with focusing on a small market and dominate that market first.

What is your view on Bitcoin? will it replace the current financial system we have?

PayPal built a payment system but failed in its goal in creating a "new world currency" (our slogan from back in 2000). Bitcoin seems to have created a new currency (at least on the level of speculation), but the payment system is badly lacking.

I will become more bullish on Bitcoin when I see the payment volume of Bitcoin really increase.

Do you think everyone should learn to code, or at least startup founders?

I think people should start learning to code in junior high school. I am still a fan of the two-person founding team, with one more on the business side and one more on the technical side.