Hong Kong, the gateway to Asia for startups

In the past few months I've heard more and more about InvestHK and StartmeupHK as well as having had the opportunity to speak to Simon Galpin the Director-General of Investment Promotion for InvestHK.

The event was mainly aimed at those looking to expand into the Asian market and why using Hong Kong as a base to tackle that market wold be most beneficial. So in this case I'd say companies which have grown beyond the startup stage really.

Asia is a huge market, yet often feels far separated from the US and Europe, much in part due to the cultural and economic differences. However startups that can expand into or target that market from the of can tap into half the worlds population.

So why Hong Kong if you're looking at tackling the Asian market?

"Location; you can access China and South East Asia very easily. Barriers to entry are very low. Unlike many other cities you don't need a local partner, minimal capital, to register a company it takes one hour. Also English is the business language. There is also a very simple tax code and less business and employment regulations letting entrepreneurs get on with getting their product/service to market."

Expanding on location, Hong Kong is 5 hours flight time away from half the worlds population. The airports is well served with flights to the rest of Asia and the world. Hong Kong as good and fast accessibility to mainland China and is close to the manufacturing hubs of The Pearl River Delta which is home to China's largest and most productive manufacturers. 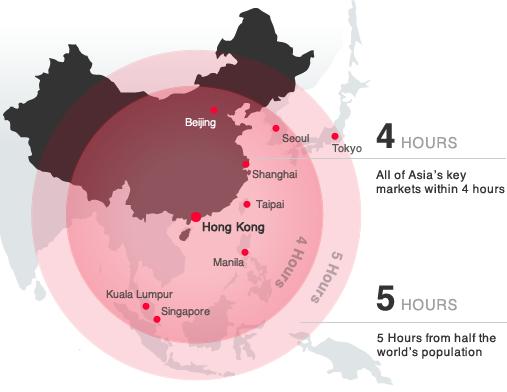 It also helps that any of the other main business markets in Asia Beijing, Shanghai, Singapore, Taipei, Kuala Lumpur and Perth, are in the same time zone as Hong Kong. Tokyo, Seoul and Bangkok are only 2 hours difference.

If you're looking at moving from London you'll also notice the similarities with Hong Kong. As Simon puts it "London and Hong Kong both have entrepreneurs from across the world, they are very cosmopolitan cities. Second thing, Hong Kong and London are both financial sectors and are also both very vibrant cities with similar lifestyle opportunities."

As one of Asia's a fastest growing startup scenes; much in part down to the work and money spent by InvestHK and help they offer startups when setting up in Hong Kong, more and more angel investors are establishing themselves which will be useful when it comes to growth.

You can check out the InvestHK site for more info and get in touch with them if you're thinking of taking on the Asian market.

Based in Hong Kong? Let us know what it's like to live and do business there in the comments below.