How 1 Second Everyday changed the life of Cesar Kuriyama

This week I was delighted to speak with Cesar Kuriyama the founder of an app called 1 Second Everyday. The app lets you choose a second of video each day which it mashes together to build a snapshot of your life lived through daily moments.

I love the app and have been using it since it was first released. I found out more about how Cesar ended up turning his life from 80 hour weeks working on stuff he didn't care about to creating a business he was passionate to work on. 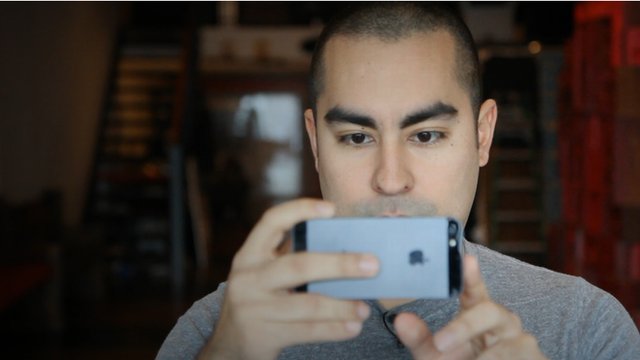 Cesar, can you give me a bit of background into yourself first:

Sure, the quick version is I was born in Peru, but I grew up in New Jersey when I was around eight. I went to art school here in Brooklyn, I studied computer animation and spent all my extra-curricular time learning every other piece of art that interested me, like film, photography, graphic design. When I graduated school I worked as a many different things. Then I got bored of working in advertising here in NY and I saved up enough money for two years to quit my job.

I decided that I wanted to able to  remember that year off, so I came up with the idea to record at least one second of video every single day so at the end I can have a six minute video of my year off.

And that had such an impact on my life that I took off to try built an app that made it easy for anyone to do, and so that's been my full time job ever since.

So when you went and took that time off work, was there any intention to start a business of your own?

The intention was to take time off, but one of my side goals was to find a way to not have to go back to the life I was living, not to go back to the 80 hour work weeks, on projects that I couldn't care less about.

I had no idea what I wanted to do, I only knew that I was going to figure out a way to not to go back to that. It never dawned on me that building an app for this project to remember my year off would end up being the thing.

That's great, so tell us more about One Second a Day.

When I started the project it was just a project for me to remember my year off by, but it was after a couple weeks that I realised the benefits that came from something that took very little time. I realised it was holding me very accountable to making every day notable.

Video lets you capture something more. I just thought about what could happen if thousands of people were doing this. We could start bringing these videos together to see a glimpse of what life is like outside our own bubble, and show just how similar we all are.

Did you have the skills to develop the app yourself?

No I didn't actually, that was definitely the hardest part of building this. I didn't know anything about building an app. I literary had to start at square one, which was to Google, “how do I make an app?”

I did design the app, but then I found developers who were talented enough, and more importantly who really believed in the idea of the project and the potential for what I wanted to do in the long term.

Tell me then where the kickstarter campaign comes into play. How much did you have done when you decided to go and do that?

I realised really quickly in my Googling that it was going to take a substantial amount of money to build what I wanted to build. So one step I took was to minimize what the app was going to be. I knew what I wanted it to look like but I also knew that I couldn't put all the bells and whistles that I wanted from the start. I needed to come up with minimum viable product.

I also started learning a lot about seed funding which was completely alien to me. Raising money was not something I had to ever consider, not something that they teach you at art school.

At the same time I was a big Kickstarter junkie. So after all the research I’d done and having several meetings with people who were interested in potentially funding the idea, it didn't seem like their intentions were aligned with mine. Eventually I thought maybe I could just crowdfund it.

It took months to put together that Kickstarter video, page and campaign. Even just coming up with reward tiers took months. Trying to come up with value, without costing you money and time is a very difficult thing to do depending on a product you're trying to get funded. 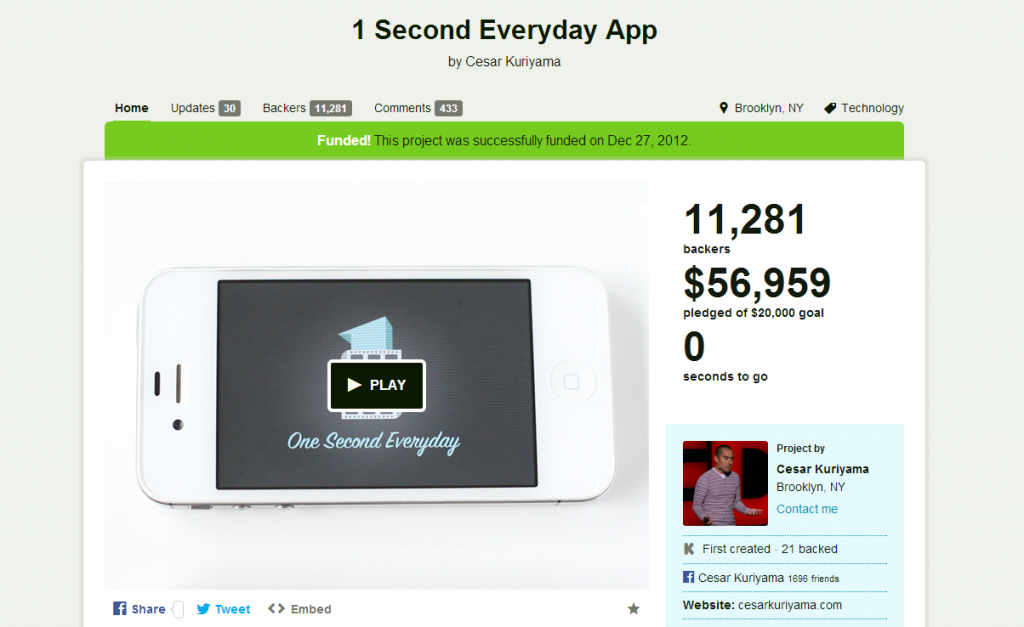 What do you think were the key aspect in ensuring that you had a successful campaign at the end?

For the most part I think people really connected to what I said in that video. I think a lot of people connected to that message of “Record Less, Live More”.

We launched it about a year ago, and it's literary just been a dollar pay-up. The Android version, which came out six months later, I ended up making that a free download with a $1 in-app purchase after 30 days if you're enjoying the app. But we do have some stuff coming up that will allow us to monetise further but I can't really speak about that right now.

What advice would you give to anyone else who's starting an app?

My first piece of advice would be more a cautionary than advice but, when I started this endeavour I didn’t realise the constant amount of updating you need to do. You can't finish an app: ‘Oh, done! I can move onto something else.’ It's ongoing never-ending. For example when iOS7 came along it broke the app for a little while for many users. Apple decided to change how video is done on iOS7 and it crippled us for a while.

Secondly I never considered the amount of time that would have to be spent on technical support; we have hundreds of thousands of users now, and basically setting up technical support system for everybody is a monumental task that I hadn’t imagined.

One last thing that goes in line with that, is that I really didn't want my app to be like all the other apps that bugs you for reviews every 5 seconds - and that's been a big regret.

I do wish I built that into the app. If you don't do that, people just won't review it - they're having a great experience and they won't say anything, it’s the people who're having problems that are the ones who go in there and chime in. And Apple doesn't give you a way to reply to them and help them. So it's been a very frustrating that was a hard lesson to learn - the hard way.

How did you continue the growth beyond the influx of users from the Kickstarter campaign?

I was very adamant that I didn't want to watermark the videos, I didn't want to cut out the date at bottom left but that's about it. But I did end up putting the logo and the website at the end of the video, and I made sure to leave one second of black between the last frame and the end tag with the logo on it. The idea there was that if you really don’t want it you can just trim that out very easily with the trimmer on the iPhone.

Thankfully most people do not do that, they don't care, they don't mind putting the One Second logo at the end - so I think every time someone posts a video they see the logo and the website at the end and that brings us new customers. That and just getting a lot of press.

Awesome, thank you very much for doing this interview for YHP.