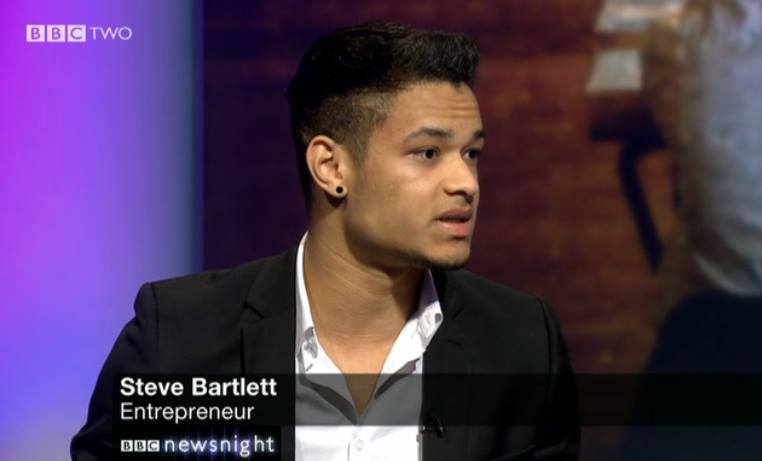 Hi Steve thanks for joining us on YHP.

Can you tell me a little about the company you are about to launch, Wallpark?

Sure, so our mission at Wallpark is to give students the power of community! We do this by connecting everyone with a stake in the student world, in each city in one incredibly unique, user friendly and useful space. The 'power' part of our mission refers to the power students have to discover and share and the 'community' includes universities, student unions (who both really love the platform), students, businesses and other organisations that have a stake in the student community within their city.

What was the inspiration behind the idea? Where were you when you realised this is what you wanted to start?

I was sat playing Xbox with my mate Joe in our halls of residence, like we did every day. That's when it began to dawn on me, that sitting playing Xbox with the same guy everyday wasn't my idea of the university experience. I imagined for a second that the other 100,000 students in  Manchester were all at some secret party we didn't know about. Then it dawned on me that they were probably doing exactly the same.

I figured that the tiny group of people, of maybe 10, I relied on for social direction; to find out what was happening, where was hiring, what special events were taking place, what sport opportunities where taking place around me etc... we're not enough. Imagine the power of community I would have, if my social compass went from 10 to 100,000. Imagine if all of us students and everyone else with a stake in the student world could connect. I went to my room that night and starting drawing, 4 months of alterations, epiphanies and critical thinking later I had Wallpark.

How do you plan to grow your user base? And will it be available for all universities right away or just a select few to start off with?

So we launch in Manchester this year. We will initially be open to the 3 universities up here but we hope to expand quickly once we have proofed the concept here.

Now you're still 19 and started university but dropped out to work on Wallpark full time, what did your parents think about this decision and what made you think this is the way to go?

My mum was very adamant that I stay in university. Her conviction began to waver as I achieved more success with Wallpark and it began to receive attention, but when she read about me in the local newspaper she went from my biggest opposition to my number one fan! My dad understood straight away that I was going to follow through with it so he focused on supporting me.

So Steve you've already raised funding, including investment from 4 very prestigious investors, how did you find the whole funding process, what challenges did you come up against?

This might come as a shock to you but I went on LinkedIn and typed in "Investor" and the first guy that came up, I emailed, and today he is one of our investors. He is a serial technology entrepreneur who actually built and sold a student website, so it was ideal!

After being dubbed "The UK's Next Pioneer" I spoke at a prestigious London conference with some of the biggest companies in the world in attendance including Facebook. Off the back of this event I gained so much interest, I subsequently agreed a further investment deal with 3 remarkably successful and well respected individuals who previously built what was the largest website in its field in the UK.

The main challenge I faced was not knowing how to value the company when all it was essentially, was an idea still.

How much of an issue was it that you were pre-launch? and how did that affect the amount you wanted to raise? Did you get what you set out too?

In the negotiation process you have to make compromises but I did fundamentally achieve what I set out to get yes.

Did you fund any of the project personally before getting angel investment?

I was a broke 18 year old student when this started, I struggled to fund myself let alone this project. In the early stages I funded myself travelling around the UK and to do various other little bits and pieces but my contribution is found in the sweat equity. Investors were imperative.

What has been your biggest challenge so far? and how have you/plan to overcome it?

I have several challenges sat in my inbox every morning, the hardest for me in the earlier stages came in deciding who to get in to build the platform. Knowing I couldn't pay them anything, them knowing I was 18 and potentially thinking I was inexperienced and me needing someone with incredible technical skills were all factors that worked against me.

I travelled a lot, with no money to my name meeting and dismissing web developers, I must have been in contact with over 200 over the period of 3 months before I found Chris Williams from Tesla Media. His pragmatic approach, technical ability and perfectionism were exactly what I was looking for. He is a real workaholic like me!

Entrepreneurship is full of highs and lows, but what keeps you motivated through those low points?

Essentially it comes down to this; I believe I am going to live once so why would I not do all I can to make this life as great as it possibly can be, and achieve as much as I can. If I fail, so what? I would prefer to spend my life trying and eventually failing than failing to try.

Do I want to get employed to help someone else live their dream or do I want to live my own? That is a no brainier. I am not satisfied with settling for less than I believe I can achieve and I have a lot of belief in my personal capabilities. I have an untouchable desire to succeed, that will never change. For me it's not a case of keeping myself going because I see no other option, I'm 100% decided that this is going to be my future win or lose.

What has been your proudest moment so far?

I think securing the second investment from 3 such prestigious investors was a very proud moment for me. I imagined telling 18 year old me what was going to happen, as if to go back in time and I imagined how he would react. He would of been a lot more overwhelmed than I actually was, but that's because I don't spend much time reflecting on what we've achieved this far, I am too busy for all of that!

What advice would you give other aspiring entrepreneurs?

I would say don't even bother with your idea if you're not passionate about it, if you don't 100% believe in it. Because when things get really hard, as Steve jobs says, sane people give up. Passion gives you the little bit of insanity that you need, if you don't enjoy it and have a passion for it don't waste your time.

Also, don't let other peoples negative opinions prevent you from giving it a go if you believe in it. I think Einstein said "You know if it's a good idea if nobody else gets it". So if they don't get it, you might just be on to something! Get a mentor. Network, Network, Network. And finally; just start! Every marathon starts with one tiny step, take that step.

What has helped you most to get to the position you are today?

Being incredibly resilient and having the belief that eventually it will all work out even when it appeared that this would all be so impossible! Also Virgin Media Pioneers have helped connect me to other young entrepreneurs which is very important.

Thanks Steve, it's great to see such a young, passionate and driven individual willing to go all out to reach his dreams! Good luck to you.

Between 18-25 years old? Starting a business? Need help? Then checkout the IncuBusLDN programme